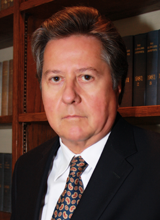 Born of a Welsh Father and Bahamian Mother in Wales in 1948, Terence Robert Horace Gape was raised in Nassau and attended St. Augustine’s College (O’ Levels) and The Government High School (A’ Levels).

Mr. Gape was called to the Bahamas Bar in November 1972 when he joined the Firm of Dupuch & Turnquest of which he is now Senior Partner and head of its Freeport Chambers.

Mr. Gape has distinguished himself as a leading Counsel in commercial matters representing such Firms as: The Southern Company, The Dart Corporation, Group Vivendi, the Ginn Company, Associated Grocers, INc, and DeVry University in their major Investments in Grand Bahama.

Mr. Gape has recently been honoured by an Appointment to The Judicial and Legal Service Commission of The Bahamas.

Always active in Community affairs, Mr. Gape is a past President of the Rotary Club of Lucaya and has served as Co-chairman of the One Bahamas Celebrations since 1999.

Mr. Gape is the father of two children, Alexandra and Justin, both of Freeport and enjoys boating and reading. As a student of History and as an avid Nelsonian, he is a member of The 1805 Club and the Nelson Society. His Clubs include the Naval and Military Club of the United Kingdom.